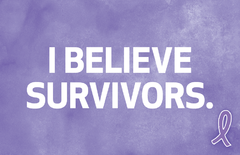 The campaign will also challenge the victim blaming culture that surrounds domestic violence and bring women’s voices to the fore of this campaign. Women experiencing domestic abuse still have to face deeply embedded myths in Irish society.

Download the Change the Conversation Myth Cards from this page; www.womensaid.ie/about/campaigns/resources.html

“She must have done something to deserve it”

“It’s Easy to Spot an abusive man, she must’ve known what he was like”

“It is not an issue of gender”

“Domestic Violence is a private matter, we shouldn’t get involved”

“If it were that bad, she would just leave”

IN MARCH this year, WOMEN ACROSS Ireland took to the streets to participate in demonstrations organised to show solidarity with victims of sexual crime. The rallying cry was #IBelieveHer, a reference to the woman at the centre of the Belfast rape trial, which concluded on Wednesday afternoon and saw Paddy Jackson, Stuart Olding, Blane McIlroy and Rory Harrison acquitted on all charges.

But while this verdict may have been the catalyst for the impromptu demonstrations, this wasn’t only about her. It was about a broken system that all too often frames victims of rape and sexual assault as liars and opportunists, guilty of luring men into honeytraps or seeking to ruin their lives. It was about a system that instils little to no confidence among women that they will secure justice should they report a rape or sexual assault. It was about a society that readily excuses misogyny in all its forms and expects women to accept it as part and parcel of being a woman in the world.

Other links to Believe Survivors Events