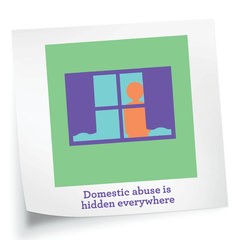 The Women’s Aid National Freephone Helpline (1800 341 900) responds to over 44 calls each day. This figure is shocking but we know that this is just the tip of the iceberg. National research conducted by the National Crime Council in 2005 on domestic abuse in Ireland found that only a small percentage of the women surveyed had accessed support from a Helpline or support service. The same research found that 1 in 7 women or approximately 213,000 have suffered severe domestic violence.

That means that there are thousands of women in Ireland suffering in silence and who are alone. It is important that any woman who is being abused feels she can talk to someone, whether that is a family member or a friend, a colleague or a support service like Women’s Aid. No one deserves to be beaten and no one should suffer in silence.

There are many reasons why domestic abuse can remain hidden for so long.

The nature of emotional abuse and control is that it is so deliberate, constant, and targeted, that it can often be invisible to an outsider. Abusers often reserve their abuse and mental torture for their partner or family inside the home only, perfectly able to act normally and respectfully to the outside world. We often hear from women on the helpline that their partner is a ‘pillar of the local community’, and that they fear that not even their own extended family would believe what is happening.

Additionally, abusers can deliberately isolate women from family and friends. Over time, this can mean that women lose touch with their support network and may feel too embarrassed or ashamed to admit what is happening to them. We hear from women that their partners want to spend all their time together, ask her to stay at home with him rather than having to go out, suggest that she should only need him to be happy. Or that a woman’s partner criticises her friends, saying they aren’t good enough for her, or tells her they are talking about her behind her back. An abuser might make a woman feel guilty every time she spends time away from him, accuse her of being unfaithful if she is out without him, or actually accompany her every time she leaves the house.

Domestic abuse can also remain hidden because a woman is living under violent threats of what her abuser will do if she ever tells anyone what is happening, or if she leaves. She might constantly hear that what is happening is her fault and even begin to blame herself.

During the summer we produced a video, Women’s Voices. This video features women sharing their experiences of domestic abuse.

Please watch and share this video, we hope that it will help women to recognise abusive behaviour and know that they are not alone.

You can watch the video here

What are the warning signs of an abusive relationship?

Everyone has arguments, and everyone disagrees with their partners, family members and others close to them from time to time.

But if this begins to form a consistent pattern and you feel afraid of your partner, then this in a sign of domestic violence. You may feel like you have no power over your life and that you are being controlled by your partner.

We have listed some warning signs below to help you make sense of your situation. Any one of the following signs is serious. You do not need to experience several, or all of them for your relationship to be abusive.

If after reading this you think that you are, or might be, living in an abusive relationship read more about domestic violence and find out how you can keep safe . If you have children and are worried about their safety, click here.

Over 300,000 people in Ireland have been severely abused by a partner at some point in their lives.

If you have witnessed or experienced domestic violence or abusive behaviour by a partner, or you are concerned you have abused someone, you can prevent it from happening again. Learn how you can help at